Ooooh, this is just so cool. I posted a while back about my love affair with the Wacom Bamboo which is a little pen tablet hooked up to my laptop that helps me maintain an illusion of a connection to my analog beginnings. This new toy brings the digital interface even closer to that original quill-scratch-on-birch-bark experience. Enter Pulse, the SmartPen, from LiveScribe. 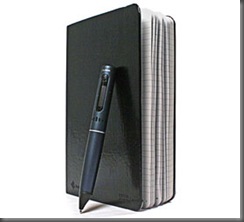 PC Magazine has the following description of this amazing little tool:

Essentially a writing implement with a small computer wrapped around it, the Pulse Smartpen uses a camera (just under and behind the pen) and custom paper with millions of microdots to capture every stroke and notation. The real magic, though, is that the pen simultaneously records every sound and connects the resulting audio to the captured image. All the captured material is timeline based, so turning back to any page in your notes and tapping the pen on a word will restart your audio at the precise moment your wrote that word.

The beauty of the audio feature is that you can make sure that you got your notes right by clicking on the word to restart the audio and measure what was actually said against what was written.

David Pogue at The New York Times reports that the Smartpen employs a process similar to another favorite product, Microsoft’s OneNote. The difference is that OneNote records while you type, while the Smartpen records while you write. For some challenges experienced by the user, check out Pogue’s article linked above.

The pen comes in a 1GB and a 2GB version and one one book of the special paper.  You can buy additional books for approximately $5 a piece, in a pack of four. The pen also comes with a docking cradle and a sheet of controls that include, among other tasks, navigation and replay and volume. Software is downloaded from LiveScribe’s website. The pen has proprietary headphones for private listening and sports a small LED screen on which you can even watch simple animation. The 2GB model can hold about 100 hours of audio , which can then be downloaded to your PC. The only downside is the inability of the software to permit effective organization or indexing of the loaded pages. I imagine this will be rectified as newer software versions are released.

I can think of dozens of applications in the business world in general and the legal world in particular for such a device.

Did I also add that it is a ball point pen?  Gee, what will they think of next? I really can’t wait.

3 comments on “The Pen Is (Now) Mightier Than The Sword”