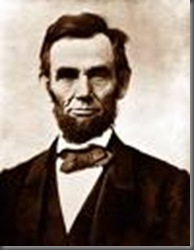 effective, persuasive writing technique owed to his skills as a lawyer. Legal History Blog links to this article by  Julie A. Oseid called The Power of Brevity: Adopt Abraham Lincoln’s Habits. The article discusses his legal background, his writing and editing habits and his use of persuasion in three of his presidential speeches. Food for thought. And for legal prose.

Another hat tip to Lifehacker, check out the following video and see if it speaks to you about your own practice as much as it spoke to me. Feel free to insert any noun in place of dance to get the full import:

Lifehacker has this news bit about optimizing any source with an RSS feed, such as your blog, for your iPhone using an application called Intersquash. I won’t get all technical with the details of how it is done, but I can say that Intersquash will redirect you to an optimized version of your feed when using your iPhone browser. The “squashing” effect does yield an interface on the small screen that is more pleasing to the eye and easier to organize. Yup, one more reason to “Embrace the Shiny.”

Although this is a blawg and I am a blawger, I don’t generally write about how to write a blog. I don’t claim to be an expert on the topic of how to write a blog. But there are plenty of others who are experts, or at least fancy themselves to be. And I know that there are some blawgers / bloggers out there that read my blawg (thank you very much) who might be interested in the best practices of blawg / blog writing.

So, for that group, here is a list of ten mistakes blog writers make compiled by Leo Babauta over at Write To Done, a most excellent blog about the craft and art of writing. Some of his hot spots include writing useful posts, posting at a good rate (4-5 times per week), avoiding flashy and annoying ads and permitting too much clutter, as well as other pitfalls. There are other tips as well and I recommend the jump above for a quick blawg / blog tutorial.

As if there wasn’t enough reason already to adore the diminutive package of technological goodness, developers are recognizing the need for apps that take full advantage of that technology. Law.com has this article about PhoneTopp, which will permit mobile web conferencing. From the article:

PhoneTopp’s application first connects users into conferences, then delivers optimized versions of presentation slides, loading them onto iPhone and BlackBerry screens more efficiently than a typical mobile browser would. Barsi says slides that might take 25 to 30 seconds in a browser can be launched in three to five seconds via PhoneTopp’s system.

‘Course, you might need to strengthen your prescription glasses to make out your co-attendees’ facial expressions. But we can leave that development need for another technological innovator.

We lawyers are frequently thought of as an intellectually-focused and logic-driven group, often found knee deep in dusty casebooks, statutes and even the Tax Code. It may surprise lay readers, and even some lawyers, to know that lawyers are people too, and even embark on creative, self-exploratory pursuits in their somewhat rare free time. So, it comes as no surprise to me that there are lawyer poets out there prolifically creating verse more pleasing to the ear than an explanation of how in rem jurisdiction applies in the instant dispute in an Opposition to a Motion to Dismiss.

Thanks to Victoria Pynchon, over at Settle It Now, for this great link to Strangers To Us All: Lawyers and Poetry. The site is full of listings and resources, anthologies and books about and by poet / lawyers. I enjoyed poking around, repeatedly finding myself smiling at the refreshing marriage of law and poetry. While I have written a song lyric or two in my day, I cannot claim the poetic touch exhibited by the drafter of the text on the site’s homepage, which concludes with this:

We may find that the poet, like the lawyer, sees the world in a nuanced way that demands it be addressed with a special language, language that calls attention to itself and sets itself apart by form, rhythm, and practice. Both poetry and law are acquired taste, all the more surprising, to have such tastes acquired by a single person.

I couldn’t have said it better myself. For more creatively intellectual stimulation, check out the poetry section from the current edition of r.kv.r.y quarterly journal for some choice selections.

A good day for Googlers, Gmail is introducing voice and video chat. From Justin Uberti over at the official Google blog:

[T]oday we’re launching voice and video chat — right inside Gmail. We’ve tried to make this an easy-to-use, seamless experience, with high-quality audio and video — all for free. All you have to do is download and install the voice and video plugin and we take care of the rest. And in the spirit of open communications, we designed this feature using Internet standards such as XMPP, RTP, and H.264, which means that third-party applications and networks can choose to interoperate with Gmail voice and video chat.

And why should you use it in your practice?

Our team is spread between Google offices in the US and Sweden, and video has really changed the way we work. Collaborating across continents and timezones is a fact of life for us, and it sure is easier (and greener) to click “Start video chat” than to get on a plane! And when I do have to visit another Google office, I can use Gmail voice and video chat to check in with my family.

More easy and free from the Big G!

I love RSS. I mean, I REALLY love RSS. Other than Twitter, it is the fastest means for information retrieval I have found on the Web. Louis Gray has provided a great list of 30 ways to use RSS to your advantage in speeding up your information flow. Included is Tabbloid, which I reported about here a few posts ago. Check it out and see if you can “Hot Rod” your Internet experience.

A quick tip from Lifehacker on how to get around subscription restriction on academic papers in Google search results. More information, less hassle!

Google: Get Around Academic Paper Restrictions

Hat tip to Legal Writing Prof Blog for a mention of this article by Mark Richardson over at The Chronicle of Higher Education called “Writing Is Not Just A Basic Skill.” Richardson’s article has great meaning for legal writers, particularly in light of the recent complaints in the press about the poor quality of writing among law students in particular and business writers in general.

Richardson complains that “common sense” notions of writing are impeding proper training in rhetoric and composition in institutions of higher learning. Richardson’s explanation regarding the genesis of these “common sense” ideas lays the groundwork for his theory as to why these ideas do not support to proper writing instruction in specific fields.

Enter the explosion of rhetoric and composition theory and practice in the 1960s. According to Richardson, ideas generated out of this explosion “fly in the face” of the previously accepted “common sense” notions. Richardson’s “truths” that conflict with “common sense” include:

The conventions of thought and expression in disciplines differ, enough so that what one learns in order to write in one discipline might have to be unlearned to write in another.

Writing is not the expression of thought; it is thought itself. Papers are not containers for ideas, containers that need only to be well formed for those ideas to emerge clearly. Papers are the working out of ideas. The thought and the container take shape simultaneously (and develop slowly, with revision).

When students are faced with an unfamiliar writing challenge, their apparent ability to write will falter across a broad range of “skills.” For example, a student who handles grammatical usage, mechanics, organization, and tone competently in an explanation of the effects of global warming on coral reefs might look like a much weaker writer when she tries her hand at a chemistry-lab report for the first time.

Teaching students grammar and mechanics through drills often does not work.

Patterns of language usage, tangled up in complex issues like personal and group identities, are not easy to change.

Writing involves abilities we develop over our lifetimes. Some students are more advanced in them when they come to college than are others. Those who are less advanced will not develop to a level comparable to the more-prepared students in one year or even in two, although they may reach adequate levels of ability over time.

The conflict is quite apparent at the University level, according to Richardson , when it inhibits proper writing instruction. Richardson relates beliefs held by administrators that composition is a “basic skill” that should be learned no later than the end of the first undergraduate year, that first year composition should be “remedial” and that basic composition is the foundation for all types of writing. “Common sense” beliefs are not bourne out when students then pursue writing in their specialized courses, particularly when higher level texts adhere to writing “rules” that are diametrically opposed.

Richardson concludes that reliance on the first year generic composition course is dangerous to higher level writing. He suggests that the better practice would be to pair rhetoric and composition instructors with professors in the various disciplines tasked with fashioning topic-specific writing courses that are tailored to the particular field of study.

What a great idea! Students interested in pursuing philosophy, logic and pre-law would be better served by instruction in proper methods of composition tailored to legal writing than by general, “remedial” instruction that does little to enhance their skill set. This is particularly true if time constraints make such instruction an “either-or” proposition. Perhaps re-thinking writing instruction at the undergraduate level will stem the flow of complaints about poor writing in the real world. Richardson’s concept certainly makes “common sense” to me.