Hat tip to Steve Rubel for this gem, which I saw over on Friendfeed. I try to go through the process shortening phrases whenever possible, but it definitely helps to have a visual to remind one of the options. As one of the commenters to Mr. Rubel’s post noted, microblogging aids his own effort to substitute phrases with words. Take a look at this list and see if you can add to it with your own subsitutions: 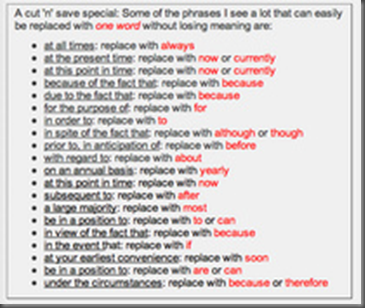 There are so many, many places to hang out on the Web and create a presence. It is a challenge, to say the

least, to visit all of these sites and maintain that presence. The desire to make the process as efficient as possible is behind my abiding interest in aggregators: sites or applications that organize and permit content flow to and from lots of different social networking locales.

I had been using Twhirl, an Adobe Air client, to organize my Twitter stream, but had defaulted back to the Web interface. But last evening, I found a reason, perhaps, to return to it.

Twhirl, which I have discussed in at least one prior post, is a desktop client for social software such as Twitter, Friendfeed, identi.ca and Seesmic. From the site, Twhirl:

Twhirl has been busy and is about to release a new version that significantly improves the “cross-talk” experience between it and many other social sites, like LinkedIn and Facebook. You will be able to update these sites all at the same time. Updates will be real time. And there will be an ability to record and post a Seesmic video right from the Twhirl client to these sites.

Check out the video at the link below of of Loic Le Meur being interviewed by Robert Scoble in which these new features are discussed. It may be time for me to return to Twhirl.