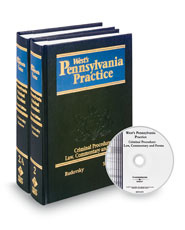 Remember the news last week about the two law professors, David Rudovsky and Leonard Sosnov, outraged at the quality of a pocket part to their treatise on Pennsylvania law and West’s false implication that the professors were the authors of it? According to The Legal Intelligencer and Shannon P. Duffy, the professors may have lost their first sortie, but ultimately may win the war. The Senior U.S. District Court judge issued his ruling on Thursday, April 23 denying the professors’ request for an injunction forcing West to affirmatively advise purchasers that the professors had not written the pocket part and offering a refund to any disatisfied customers. Fortunately, for West, the judge denied the request. Unfortunately for West, the judge’s reason was that the harm had already been done.

The judge intimated that the professors likely had viable claims under the Lanham Act and defamation laws. And the judge himself opined that the pocket part was not up to standard and that the professors were entitled to some form of remedy. Ouch! But since the harm had already been done, an injunction was of little point.