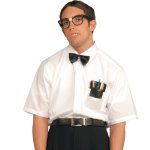 Newsflash: the Internet is NOT making you weird! According to the Pew Internet & American Life Project, studies show that people who employ modern methods of communicating via the Web and mobile devices actually have larger and more diverse social networks. You can download a copy of the report of the study here. What are the numbers? From the press release:

“The new findings from the Pew Internet & American Life Project show that, on average, the size of people’s discussion networks – those with whom people discuss important matters– is 12% larger amongst mobile phone users, 9% larger for those who share photos online, and 9% bigger for those who use instant messaging. The diversity of people’s core networks – their closest and most significant confidants – tends to be 25% larger for mobile phone users, 15% larger for basic internet users, and even larger for frequent internet users, those who use instant messaging, and those who share digital photos online.”

The study was directed, in part, at measuring a perceived increased level of social isolation experienced by heavy users of the internet and mobile devices, but found quite the opposite. While “discussion” networks in real life have been shrinking since the mid 1980’s, these networks have been growing for on-line users. There are a number of other semi-startling results that challenge popular opinion as well: on-line use does NOT equate with less involvement in the local community; intenet use is spread equally between long-distance and local communication; internet use actually encourages visits to public places, such as libraries, parks and coffee shops,  – many go to such places to engage on-line, and on-line discussion networks usually include a far wider representative sample of backgrounds and diversity than in real life groups.

In other words, the researchers conclude that your social life is enhanced, rather than hindered, by engagement in on-line communication and activity. Don’t hesitate to enter the on-line fray to expand your discussion groups and influence and increase your value to others.

You can breathe easy now. Internet use does NOT make you weird. But it may not be able to help you if you already are.